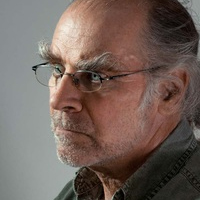 James Leonard currently lives in the Pocono area of Pennsylvania, attending to his infirm mother. His permanent residence is a historic house on a ten-acre farm in Lewisberry, York County, Pennsylvania, where he spends time making wine for family and friends and complex copper wind “machines” with propellers and as many as 2000 parts. He has made at least 100 of these works that range in size from one to five feet in length. Separated from his workshop tools, he currently makes elaborate frames for an artist friend’s glass plaques.

Born in East Orange, New Jersey, following high school graduation, he joined the Navy and became an optical man fixing periscopes and binoculars. He served in Guam and following discharge taught himself cabinetmaking. For several years, he exercised his cabinet making skills and also worked in construction. Leonard began making whirligigs (toys having a whirling motion) in the 1970s, inspired by personal experience and political and social themes.

This work was in the Liberties With Liberty exhibition at the Museum of American Folk Art,1986, an exhibition that coincided with the hundredth anniversary of France’s generous gift of the Statue to the United States.