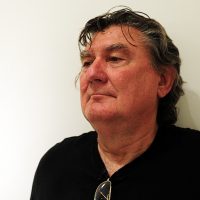 Born in Terrell, Texas, Surls earned a Bachelor of Science degree in 1966 from Sam Houston State College, Huntsville, Texas, and a Master of Fine Arts degree in 1969 from Cranbrook Academy of Art, Bloomfield Hills, Michigan. Among his many honors include the 1993 “Living Legend Award” from the Dallas Visual Art Center, Dallas, Texas; the 1991 “Artist of the Year” award from the Houston Area Art League, Houston, Texas; and a National Endowment of the Arts Fellowship in 1979.

“No artist of his generation has had a greater impact upon the development of Texas as a locus of vibrant creativity than the sculptor James Surls. A native of East Texas, he graduated from Sam Houston State College in Huntsville and held teaching positions in Dallas and Houston, before recently moving with his family to Colorado. Not only did his art evolve from his father’s proficiency as a carpenter and his mother’s fertile imagination and supportive disposition, but he has rooted his art in features unique to the abundant terrain of Texas – green grass, trees, sticks, rivers, rocks, blue sky, wind, and stars. In my sculpture, ‘I conjure from nature,’ he asserts.

Yet Surl’s artwork goes beyond the physical attributes of the region…He is interested in the myths as much as the materials of any given piece. “When you are doing your art correctly,” he says, “you want others to see the life that’s within your own soul.”

James Surls’ art springs from all the forces of nature – male and female, vertical and horizontal, open and closed, rough and smooth, active and passive. The poetry arises from the subtlety with which he manipulates and coaxes the medium of steel, bronze, and wood to express these forces.”