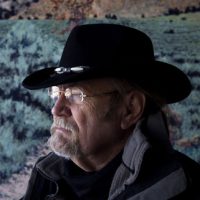 These paintings draw inspiration from the high deserts of the southwest, mostly in Texas and New Mexico. These “outer” landscapes are modified by “inner ones”. The inner concerns are a dialogue with dreams, memories, thought fragments and streams of consciousness. By the contextual placement or overlay of inner and outer, I hope to convey my own thoughts about the nature of imagination: to achieve a sense of the imagination’s movement (tempo) against a relatively unchanging environment (duration).

I’m interested in calling attention to the act of painting as well as to how one understands visual conventions by combining self-referential marks and forms with more traditional rendering. I hope that these juxtapositions enliven the surface and create an ambiguous space that causes the viewer to question his/her notions about perceptional space. I would like to provide the viewer choices that lie between dualities like cultural and natural, perspectival and encompassed, near and far, representational and abstract, mythic time and geologic time, movement and stillness, order and chaos. I want the landscapes to be understood as a “verb” rather than a “noun”.