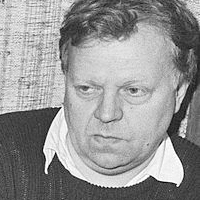 Jan Dibbets was born in Weert, Holland in 1941. He trained as an art teacher at the Tillburg Academy, before studying painting in Eindhoven between 1960-63. In 1967, he studied at St Martin’s College, London where his contemporaries included Richard Long and Gilbert & George. He currently lives and works in Amsterdam.

In 1967 Dibbets was one of the first artists to recognise large-scale colour photography as a medium in its own right. He initially used the camera to create a dialogue between nature and cool geometrical design creating the seminal series of Perpsective Corrections before moving on to man-made structures such as in Colour Studies. Since then he has incorporated landscape, cupolas, windows and water into his highly individual body of work.

His exhibition in the Dutch pavilion at the Venice Biennale in 1972 established Dibbet’s international reputation and he has influenced generations of younger photographers both through his own work and his teaching at the Düsseldorf Academy. His work has been the subject of numerous museum exhibitions and is in collections including the Stedlijk, Tate and MOMA, New York. His work was recently featured in Colour Chart at MoMA, NY and Tate Liverpool.