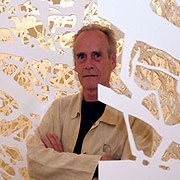 Jan Hendrix was born in Maasbree, Holland. He studied at the Ateliers 63, Haarlem, and the Jan van Eyck Akademie in Maastricht. Between 1971 and 1976, he lived in France, Portugal, Norway, and Ireland, and has lived and worked in Mexico since 1978. Hendrix has exhibited his work in solo exhibitions since 1975 and has participated in group exhibitions in Mexico, and throughout Europe, the United States, Indonesia, China, Australia, and Kenya. His works range from artist’s books, print editions, enamel installations, etched glass, and paintings, to architectural projects, and they can be found in numerous collections, including those of the Bibliothèque Nationale, Paris, France; the Instituto de Artes Gráficas de Oaxaca, Mexico; Stedelijk Museum, Amsterdam, Holland; and the Museum of Modern Art, Dublin, Ireland.