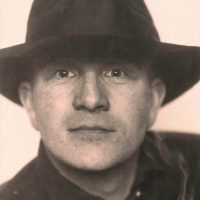 Jan Wiegers was educated at the Minerva Art Academy in Groningen, while also following courses in Rotterdam and The Hague. In the years before the First World War, he traveled extensively through Germany, where he became familiar with the avant-gardist movements of that time.
In 1918, having finished his education, he was one of the founding members of the Groningen art circle ‘De Ploeg’ (‘The Plough’). This group of young artists felt the need to ‘plough through’ the traditional artistic ideas prevailing in their hometown, and to generate more enthusiasm about modern art. The circle had no artistic manifesto, and had mostly practical aims: to share working space, organize collective exhibitions, and support each other financially when necessary.
The turning point in Wiegers’ artistic life came in 1920, when – financially supported by his artist friends – he went to Switzerland to recover from lung disease. After his stay in the Davos sanatorium, Wiegers settled in the nearby hamlet of Frauenkirch. It was there that he met the German expressionist Ernst Ludwig Kirchner. The two men got along well, developed a close friendship, and Wiegers became deeply impressed by Kirchners artistic style and methods. In Kirchner’s colorful expressionism, Wiegers found the inspiration he had been searching for in previous years.
After his return to Groningen, Wieger’s enthusiasm for expressionist painting was the basis for a true avant-garde movement. Together with various other Ploeg colleagues, he experimented freely with the expressionist palette. The new style they created, which has been called ‘Groningen expressionism’, was most clearly characterized in the completely new way it depicted the landscape of the Groningen countryside. Besides the landscape, portraiture and Groningen city life were beloved subjects.
Although Wieger and Kirchner would remain friends until the latter’s death in 1938, Wiegers’ expressionism gradually softened during the late 1920s. ‘Wadden Dyke with pond’ is a work from this transitionary period. During the 1930s and 1940s, his work tended more towards impressionism, only to return to a more experimental style after the Second World War. From 1953 until his death, Wiegers was a professor at the ‘Rijksacademie’ (State Academy for Fine Arts) in Amsterdam.