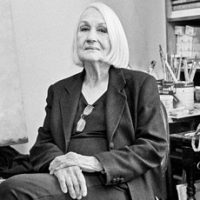 Wilson received her Bachelor of Arts and Master of Arts from the University of Iowa in Iowa City. She moved to New York in 1949, where she would go on to hold professorships at Columbia University and the Pratt Art Institute. Wilson has exhibited regularly in New York since the early 1950s at such galleries as the DC Moore Gallery and Fischbach Gallery. She has received numerous awards including Benjamin Altman Prize from the National Academy of Design; the Eloise Spaeth Award from The Guild Hall Museum in East Hampton, NY; and the Adolf and Clara Obrig Prize National Academy of Design. Her work is in public collections all over the country including the Hirshhorn Museum in Washington, DC; the Museum of Modern Art in New York; and the Whitney Museum of American Art in New York.

Image Courtesy of Elliot Erwitt for The Wall Street Journal