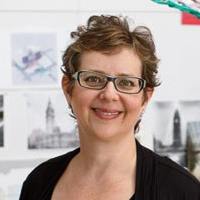 Janet Echelman is an artist who defies categorization. She creates experiential sculpture at the scale of buildings that transform with wind and light. The art shifts from being an object you look at, to a living environment you can get lost in. Using unlikely materials from fishnet to atomized water particles, Echelman combines ancient craft with cutting-edge technology to create artworks that have become focal points for urban life on four continents.

Recipient of the Guggenheim Fellowship, the Harvard University Loeb Fellowship, a Fulbright Lectureship, and the Aspen Institute Crown Fellowship, her TED talk “Taking Imagination Seriously” has been translated into 34 languages with more than one million views. Ranked number one on Oprah Magazine’s List of 50 Things that Make You Say Wow!, she was named an Architectural Digest Innovator for “changing the very essence of urban spaces.” She recently received the Smithsonian American Ingenuity Award in Visual Arts, honoring “the greatest innovators in America today.”