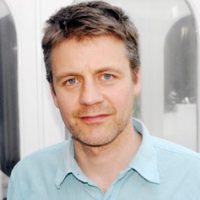 Jason Oddy is an artist and writer whose work focuses on the politics of place. His photographic investigations of the Pentagon, ex-Soviet sanatoria, Oscar Niemeyer’s Algerian projects, Guantanamo Bay and the United Nations headquarters in New York and Geneva have been published and exhibited internationally including at the Photographers’ Gallery (London), Paris Photo, the Milan Triennale, the Tropenmuseum (Amsterdam), the Aperture Foundation (New York) and the Museum of European and Mediterranean Civilisations (Marseilles).

Oddy’s work is held in numerous private and public collections including the Wellcome Collection, the Michael Wilson Centre for Photography, the Elton John collection, Channel 4, Citibank Private Bank, DZ Bank and the University of Hertfordshire.

He is the recipient of numerous awards from funding bodies including Arts Council England and the Graham Foundation. He is currently working towards a monograph on Oscar Niemeyer’s Algerian projects to be published in 2019.

As a writer Oddy has worked extensively as an art and architecture critic. Oddy has taught at numerous institutions, including the School of Visual Arts (NY), Domus Academy (Milan), and London’s University of the Arts. He holds an MA (with distinction) in post-war literary theory from University College London.