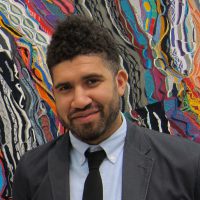 Jayson Scott Musson series of Coogi sweater paintings in works like Deep Field Projections, (2015), explore the in-between spaces of high-art versus craft, intentional versus found abstraction, and, most significantly, the notion of ownership of African American popular culture. On working with patterned sweaters, disassembling them, reconfiguring them into larger “paintings,” he says, “One spring night in 2011, while combing the internet, I came across an image of a hooded sweater made by Coogi, an Australian clothing company. Coogi brand sweaters are commonly known for their vibrant textured knits and most commonly conjure a generational association with Bill Cosby as Clifford Huxtable on The Cosby Show, or the late rapper Notorious B.I.G. of Bed-Stuy, NY. As someone raised on rap music and its signifiers of status, [I thought that] Coogi sweaters always possessed a kind of peculiar allure—the garments revered as a status symbol.”

“The thing I found most alluring about Coogi sweaters,” he continues, “was how painterly they were. They seemingly lingered on the borders of gestural abstraction. I made the joke, ‘That Coogi looks like a Pollock.’ Over the course of the following weeks, I began collecting images of the sweaters, studying their composition. They seemed to defy the traditional logic of the textile, opting instead to appear spontaneous and created by hand rather than machine-made. Each sweater, though a manufactured object, seemed to seek its own authenticity. Even the old Coogi slogan “Wearable Art” seemed to confirm the desire for each sweater to be considered an objet unique, a specialized commodity.”

A native New Yorker, Musson received his Bachelor of Fine Arts degree in Photography from the University of Arts, Philadelphia, and his Master of Fine Arts degree in painting from the University of Pennsylvania. He also attended the Skowhegan School of Painting and Sculpture in Maine (2011). He is known as a painter, textile artist, and performance artist (Hennessy Youngman, Art Thoughtz), who works in photography and video as well. He has exhibited nationally and internationally in several solo and group exhibitions.