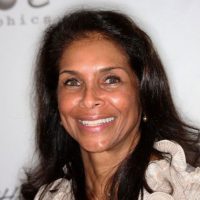 Jeanne Moutoussamy-Ashe is a widely celebrated African-American photographer from Chicago, Illinois. After her formal education at the Art Institute of Chicago and then at The Cooper Union in New York, she began a professional career as a graphic artist and photojournalist for WNBC-TV. Her talent was quickly recognized, and she began exhibiting in both solo and group exhibitions around the world. In addition to having her work featured in major U.S. publications like Life Magazine, the New York Times, People magazine and the Associated Press, she has been exhibited at Leica Gallery, the Museum of Modern Art, the Whitney Museum of American Art and the Brooklyn Museum of Art in New York, the Smithsonian and the National Portrait Gallery in Washington, D.C., Galerie Herve Odermat in Paris, and The Excelsior in Florence.

Jeanne Moutoussamy-Ashe’s documentary photographs typically contain a strong narrative, often focusing on the African-American experience. The four photographs in the Brazzaville Embassy collection are from her series of photographs taken for her book Daufuskie Island: A Photographic Essay that documents the Gullah community in the U.S. state of South Carolina. As evidenced in Church Members Join Hands in Prayer, Jeanne Moutoussamy-Ashe has a highly artistic sense of composition, obvious technical skill, and an ability to connect with her subject on a humane level. Wedding Cake is another example of her ability to engage her subject in a manner that perfectly captures a brief moment in time that is both poignant and immediate. Calibogue Sound at Dawn and The Old Prayer House are also compelling subjects that capture the quiet spirit of Daufuskie Island, a unique sea island between Georgia and South Carolina that is noted for its Gullah population, the descendants of freed slaves, who settled there after the American Civil War. The island, which is only eight miles wide and has a population
of roughly five hundred people, is a destination for music lovers and is noted for its unspoiled natural beauty.

Jeanne Moutoussamy-Ashe has published several books including Daddy and Me that features her photographs of her late husband the world-renowned tennis player Arthur Ashe and their daughter Camera. In 2001, she published her fourth book of photography titled The African Flower: The Singing of Angels.

In addition to her individual artistic pursuits, she has taught photography to both high school and college students, and she has been a guest lecturer at many educational and cultural institutions. She has also been involved in many philanthropic endeavors involving social, health, and community issues. She is the director of the Arthur Ashe Endowment of the Defeat of AIDS, has been a former trustee for Cooper Union, and was a presidential appointee to be an Alternate Representative of the U.S. to the United Nations. 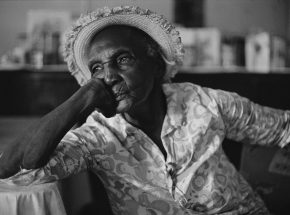