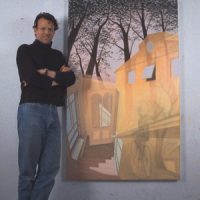 The following is from the artist, April 2004

Jeff Carpenter creates oil paintings by layering images to explore a kind of neo-cubism that includes not only shifts in perspective but shifts in time. He works with a fully-loaded brush or palette knife in transparent glazes that refer to double-exposure as well as pentimento. He says of his work, “If you think of a fond memory of a wonderful day it’s rarely just one snapshot, it’s many images – the full panorama, the light in her eyes, the wind in the leaves, all layered one on top of each other. Summoning that memory is like peeling an onion.”

Carpenter was born in 1953 in Greenville, Delaware. He studied with the painter Tom Bostelle near Greenville, and then went to Rhode Island School of Design, where he earned a BFA in Film in 1976. His thesis project, a short animated film called “Rapid Eye Movements”, played the Cannes, Berlin and New York film festivals.

His first gallery exhibition was in 1974 at the Richard Demarco Gallery in Edinburgh. It was an installation using the color separation transparencies of a map hanging from the ceiling so that the viewer could walk through the different layers of the image. Carpenter continues to explore the themes of narrative, transparency, and maps in oil paintings, and digital photographs. Recently he’s spent half the summer in the field painting plein-air studies and has been a part of several plein air festivals.