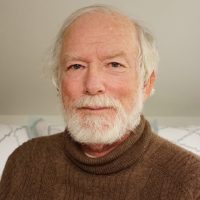 Every true artist manipulates the world, seeking by various means to represent a personal vision of what is out there—to alter, heighten, transform. For going on 25 years Jeffery Becton has used photography to reinvent his surroundings, blending interior and exterior to visually compelling effect. He calls these compositions digital montages; I call them invitations to an alternative—and remarkable—reality.

Becton’s photographs are especially resonant of certain elements of Maine: islands and old houses and light. His is a kind of vintage world where attics still hold treasures, where ceilings slant at odd angles, where a piece of furniture—a chair, a bureau, a lamp—takes on a presence that serves as a stand-in for the people who inhabit these otherworldly spaces. When someone does appear, such as Claudia in the Wharf House, they seem perfectly aligned to the place and add to the haunting—and haunted—quality of the mise-en-scène.

Among Becton’s aesthetic kin one must count the Surrealists—in particular, perhaps, Magritte, who liked to mess with our grasp of the landscape. One might also make a connection to the Edward Hopper painting Rooms by the Sea (1951), in which the waters of Cape Cod Bay come right up to the door of the artist’s Truro studio. Of course, Becton brings the ocean into his houses, thereby conjuring the tidal and porous nature of our existence.

Becton’s compositions also have a place in the trompe-l’oeil tradition, although I would argue that his immaculate images move far beyond fooling the eye. They subvert perception by drawing us into an out-of-the-ordinary universe that makes perfect sense. We may be disconcerted by the flooded floor of an adjoining room, but we enter it nonetheless.

When asked what it was like to live on a Maine island, the great Belgian-born novelist Marguerite Yourcenar replied: “You feel that you’re standing on the border between the
human world and the rest of the universe.” Her words keep coming to mind while studying Becton’s photographs, which capture that in-between milieu that one inhabits when living by the sea.

Time and again Becton’s seamless compositions paradoxically blur the boundaries between the conscious and the unconscious, the real and the dream. That is his singular art.

Carl Little’s latest book is Nature & Culture: The Art of Joel Babb. He lives and writes on Mount Desert Island. 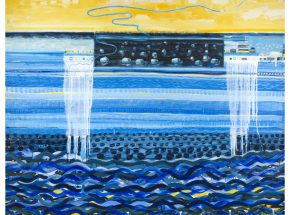