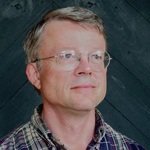 After graduating from Philips Exeter and Yale (’67), where I majored in English, I went on to art school. At Yale, I had taken a figure-drawing course under Dean Keller, who later recommended that I attend the Hartford Art School, which had become part of the University of Hartford. I earned a BFA in painting, studying under Paul Zimmerman and Rudolph Zallinger, among others, and began teaching.

For almost thirty years I worked as an art teacher and, eventually, department head at the Westminster School in Simsbury, CT. During those years my own studio work was confined to school vacation periods. I was reluctant to take time to market my work because that would cut into the limited time I had for painting. By the year 2000, my work at Westminster had become increasingly involved with photography and administration in a large (and very vital) department. I felt that my own painting was in danger of becoming a “hobby”. With our children successfully launched in the world of grown-up employment (the Army & Wall Street), I realized that now, if ever, was the chance to see what I could do if I devoted myself full-time to painting.

So, since the summer of 2000, Linda and I have been living our dream life as year-round residents of Block Island, and I have a new career as a full-time artist.

After nine years, I still feel like a beginner, and my most exciting painting is always the one I’m working on (or the next, in my mind’s eye)….