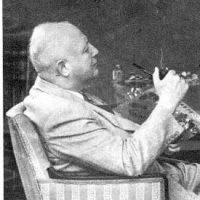 Born on the maiden voyage of the Kaiser Wilhelm der Grosse to the United States, Jes Schlaikjer grew up on a homestead in Tripp County, three miles north of Carter, South Dakota. A 1916 graduate of Winner High School, Schlaikjer, who had been a teenage railroad telegrapher, published his first artwork in the Carter weekly newspaper. He joined the U.S. Army Signal Corps when the country entered World War I, ending up in Paris, France, as the chief receiving operator at the Layfayette radio station. At war’s end, he attended L’Ecole Nationale des Beaux-Art in Lyons, France.

Upon returning to the United States, Schlaikjer studied at the Art Institute of Chicago, Illinois, graduating in 1923. After leaving Chicago, he continued his studies with Harvey Dunn, Robert Henri, a noted portrait artist, and Dean Cornwell, one of Dunn’s most famous students. His illustrations were featured in several periodicals, including American, American Legion Monthly, Red Book, and Women’s Home Companion. In the 1920s and 1930s he also illustrated the covers for the pulp magazine Black Mask. In addition, he received national recognition for his painting. In 1926 Schlaikjer received the first Hallgarten prize for The Pink Cameo, a portrait of his wife, at the National Academy of Design Annual Exhibition in New York. He also won the second Hallgarten prize in 1932 for his painting The Little Ones. In 1928 he was the winner of the first Altman prize for the best figure painting by an American-born citizen for South Dakota Evening. Schlaikjer also exhibited at the Pennsylvania Academy of the Fine Arts in Philadelphia, and the Corcoran Gallery of Art in Washington, D.C.

During World War II, Schlaikjer was chosen to be a War Department artist at the Pentagon. While there, he designed war posters for the military and Red Cross. He also painted portraits of military leaders including Dwight D. Eisenhower, Douglas Mac-Arthur, George S. Patton, and many others. After his wartime service he established a portrait studio in Washington, D.C., where he died.