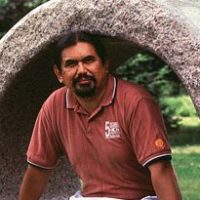 Well known for his monumental granite sculpture, Jesus Moroles has one of his works in the White House sculpture garden. A 64 ton piece is also across from the Museum of Modern Art in New York City. He works, not by carving granite, but by hammering 5-inch steel wedges into large slabs, causing them to split against the grain. He polishes some surfaces and leaves others raw.

He apprenticed with Luis Jimenez, who tried to persuade him unsuccessfully to work in fiberglass that looked like stone. But he wouldn’t do it because he likes “living stone” that resists his efforts. Moroles first encountered granite in 1978 on the eve of his graduation from the University of North Texas in Denton. And his first piece of granite sculpture sold at the Shidoni Outdoor Sculpture Show in Tesuque, New Mexico, which of course gave him much encouragement.

For the last 20 years, beginning in the 1980s, Moroles, born and raised in the inner city of Dallas, has based his studio in Rockport, Texas, about 35 miles north of Corpus Christi. It is a sleepy, fishing village but is also headquarters to Moroles, Inc., a multi-million dollar business that employs about 20 people. His parents, Mexican immigrants, also live on the property as do the peacocks raised by his father. He travels widely including to Aswan, Egypt and Changchun, China where he has installed his sculpture.