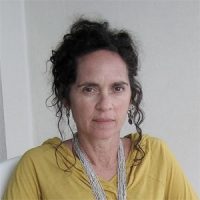 I am a native New Yorker who attended Queens College, CUNY, for my B.A. and received a fellowship to the Yale Summer School of Art at Norfolk, Ct. in my junior year. I received my Master of Fine Arts degree at the Yale University School of Art in 1977, which included a semester at the Royal College of Art in London. After graduate school I returned to New York City. My work has been widely shown since the late 1970s in both group and one-person exhibitions; in 2000 I was the recipient of a John Simon Guggenheim Fellowship and in 2005 a NYFA Fellowship. My sculpture is found in numerous private and corporate collections as well as in the Metropolitan Museum of Art, New York, and in the Vogel Collection at the National Gallery of Art, Washington, D.C. For over thirty years I have explored the hybridization of painting and sculpture. The sculptures are constructed of pre-cut geometric Styrofoam shapes, covered with plaster dipped gauze and modeling compound and painted with oil paint. Line, shape and pattern have been used to enhance and camouflage the sculptural form warping and weaving over the surfaces. In Girl Talk the Hindu imagery loops around the sculptural forms echoing the concentric circular movement of the artwork.