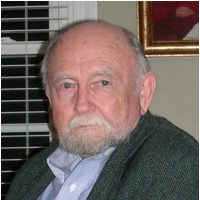 Jim Cantrell has been an independent studio artist in Bardstown, Kentucky since 1971. A native of Oklahoma and raised in eastern Nebraska, he earned his Bachelor of Fine Arts degree from the University of Nebraska at Lincoln in 1958 and his Master of Arts degree from the University of Northern Colorado in Greeley in 1965 with a double emphasis in ceramics & painting. He began his distinguished career as a teacher but after 14 years left the academic world to pursue his passion and “practice what he had been preaching.”

His primary focus in the beginning was to establish his ceramics studio in Spalding Hall (part of the defunct St Joseph Preparatory School for Boys). Ceramics Monthly magazine published a feature story on his studio, “Bardstown Pottery” in 1973. During the next 18 years he made pots during the day and painted at night. As his reputation as a painter grew, he began spending more time in his painting studio working in both oil and watercolor. In 1987 the American Artist magazine did a feature on his watercolors and technique.

Cantrell’s paintings can be seen in major public, private, and museum collections in the U.S, England, Ireland, Scotland, France, and Japan. Participating in over 300 solo, group, and juried exhibitions, he has been the recipient of many awards, including two Al Smith Fellowship grants from the Kentucky Arts Council and one from the Southern Arts Federation. He was named Alumna of the Year for Creative Achievement at the University of Northern Colorado in 2000. Cantrell’s work was among those selected to be exhibited in the Art in Embassies Program in 2005. His work went for three years to the American Embassy in Riga, Latvia. When Maker’s Mark Distillery sponsored a competitive event, “The Mark of Great Art” in 2008, Cantrell’s oil, “Maker’s ‘Round the World,” won first place, and it now hangs in England in the four star London Bridge Hotel’s Borough Bar.

The impression of Cantrell paintings that will remain in the viewers’ minds is his stunning versatility & use of color, his fine composition, design, and craftsmanship whether the subject matter be the figure, architecture, industry, or landscape.