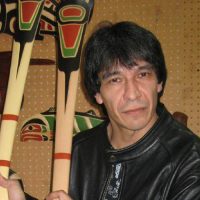 Jim Charlie was born September 10th, 1967 in North Vancouver, British Columbia, Canada. He is a member of the Coast Salish Nation, Squamish Band, Capilano Reservation. This Nation occupies the southern region of the province.
Jim comes from a long line of artists; therefore, it was only natural that he began to carve at a young age. He has been making Northwest Coast Native art for over sixteen years.

Jim is the grandson of Dominique Charlie, who passed on some years ago. He was a highly-regarded carver during his time. He educated Jim on the many stories and legends common to the Salish people and inspired him throughout his years of carving.

Jim has been influenced by many well known artists and strives to achieve the utmost quality in his work. He is a versatile artist who enjoys depicting a variety of legends. His style is refined, uncomplicated, and dimensional with a northern influence.

Jim is one of many Northwest Coast Native artists who are preserving their cultural background through their artwork for future generations.