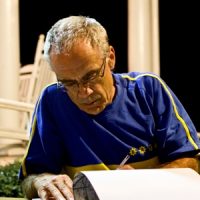 Dow earned a B.F.A. and a M.F.A. in graphic design and photography from the Rhode Island School of Design in 1965 and 1968 respectively. An early influence was Walker Evans’s seminal book American Photographs (1938). Dow recalls the appeal of Evans’s “razor sharp, infinitely detailed, small images of town architecture and people. What stood out was a palpable feeling of loss…pictures that seemingly read like paragraphs, even chapters in one long, complex, rich narrative.” Soon after graduate school Dow had the opportunity to work with Evans. He was hired to print his mentor’s photographs for a 1972 Museum of Modern Art retrospective.

Dow has taught photography at Harvard, Tufts University and the School of the Museum of Fine Arts, Boston, and his work has been widely exhibited. Among his series is Corner Shops of Britain (1995), which features facades of small family-run businesses: vitrine-like shop windows showcase goods from candy jars to jellied eels. Another series, “Time Passing” (1984-2004), captures North Dakota “folk art” such as rural road signage, handpainted billboards, and ornate gravestones.

Dow first gained attention for his panoramic triptychs of baseball stadiums, a project that began with an image he made of Veteran’s Stadium in Philadelphia in 1980. Using an 8″ x 10″ camera, he has documented more than two hundred major and minor league parks in the United States and Canada. 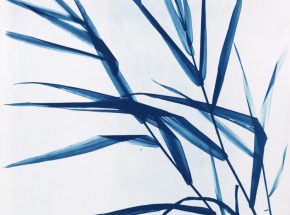