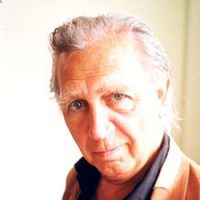 Jimmie Durham (born in 1940 in the U.S.) is a writer, performance artist and visual artist.

In the early 60’s he began working in theater as part of the Civil Rights Movement in the U. S. South, and published poetry in small magazines. His first solo exhibit of art was in 1965 in Texas. In 1968 he moved to Geneva, Switzerland, and returned to the U. S. in 1973. From 1973 to 1980 he was an activist in the American Indian Movement, and was a member of its Central Council. From 1975 to 1980 he was also the Executive Director of the International Indian Treaty Council. During the early 80’s he was Director of the Foundation for the Community of Artists (FCA) in New York City. In 1987 he moved to Mexico, and returned to Europe in 1994, living in France, Belgium and Germany where he continues to live (in Berlin).