Josephine Gail “Jo” Baer, born Josephine Kleinberg August 7, 1929, is an American artist, whose works are associated with minimalist art.She began exhibiting her work at the Fischbach Gallery, New York, and other venues for contemporary art in the mid-1960s.

Before relocating to New York City (1950–53) to earn a master’s degree in psychology at the New School for Social Research, she lived on a kibbutz in Israel for six months.

Baer’s early work was informed by an admiration of the Abstract Expressionists — Gorky, Motherwell, and Rothko — a movement she later rejected, in favor of painterly hard-edge work.[4] Baer notes that the early Minimalists called their painterly hard-edge paintings “idiot work,” since they were made on saw horses, rather than on the wall. Knowing what she needed to do, she just got it done.

Having grown up in Seattle, Baer’s early paintings employed the black, red, green and beige (or sand) familiar to Northwest Indian Kwakiutl totem poles. In 1962, she began the series of paintings that dealer Richard Bellamy later named the “Koreans.”

Although Barbara Rose never mentioned Baer in her influential 1965 article ABC Art in Art in America, a photograph of Baer’s work illustrating Rose’s article inspired gallery director Donald Droll to offer her a solo exhibition at Fischbach Gallery in 1966. Baer’s hard-edge paintings were included in notable Minimalist exhibitions including Dan Flavin’s Eleven Artists (1964) at Kaymar Gallery, Dwan Gallery’s 10 (1966), Lawrence Alloway’s Systemic Painting (1966) at the Solomon R. Guggenheim Museum and Art in Series (1967) at the Finch College Museum. In 1969, she began experimenting with wraparound paintings, object-like paintings with diagonal and curved forms that are known as the Radiator paintings (1970–1974), since they hang on the wall just above the floor.

Baer, one course shy of a master’s degree in psychology, demonstrated her continued interest in this material in her 1970 essay regarding the optical illusions known as Mach Bands (named after the physicist Ernst Mach), at this time her paintings were very much about the edges of the canvas. To get over stage fright, she took dance classes with Yvonne Rainer and Lucinda Childs, eventually performing Rainer’s “The Mind is a Muscle” at the Lincoln Center Library. Other dancers she befriended include Judy Dunn, Meredith Monk and Trisha Brown.”

In the 1950s Baer also worked as a photographic model, and she has claimed in an interview that (by coincidence) she modelled for the semi-nude photo in Richard Hamilton’s famous 1956 collage Just What Is It that Makes Today’s Homes So Different, So Appealing?.

She is still working but has said “Being so old now, I’m tempted to stop, if I only wasn’t so sure I’d be bored to tears if I did.” 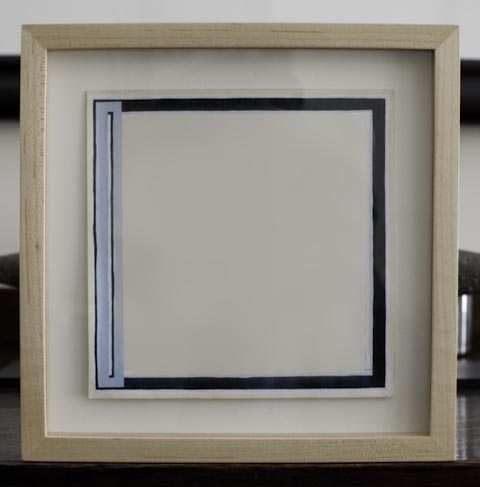