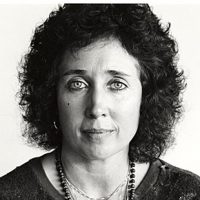 Joan Brown (1938 – 1990) was an American figurative painter who lived and worked in Northern California. She was a notable member of the “second generation” of the Bay Area Figurative Movement.
She was born in San Francisco and studied at the California School of Fine Art (now San Francisco Art Institute), where her teachers included Elmer Bischoff. She achieved prominence with a style of figurative painting that combined bright color, sometimes cartoonish drawing, and personal symbolism.
Brown was married to Bay Area Figurative sculptor Manuel Neri from 1962 to 1966, though their relationship and artistic collaboration dated back several years prior to this. Their son, Noel Neri, is also an artist.
In the late 1970s, Brown became increasingly interested in spirituality and New Age ideas, eventually becoming an adherent of Sathya Sai Baba. She made a number of trips to his ashram in Puttaparthi, India. In 1990, she died in a construction accident while installing an obelisk at the Sai Baba’s Eternal Heritage Museum in Proddatur, India.
Brown was also a competitive swimmer.
www.wikipedia.com