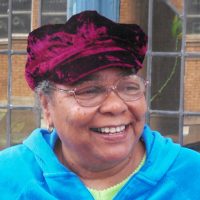 Joan Dance was raised in Paducah, on the Ohio River in extreme western Kentucky, where she continues to live to this day. Coerced into leaving school to go to work in her early teens, she married young and had four children all now grown. Her first marriage was abusive, but she later remarried. For many years she wrote poetry as a means of self expression, but recalls that her hand would shake as she wrote, making writing a difficult challenge. Sometime in 1994, she felt compelled to do a drawing of a church, which she completed, discovering that her hand no longer shook as she was drawing. She then drew other church buildings, and began to incorporate images of people into those compositions. Next she started to paint, and her work soon expanded to non-church subjects. Her art was noticed and people began collecting it and in 1995 Kentucky Folk Art center staged a solo exhibition of her work. Her subject matter is wide-ranging and includes scenes from everyday life with special emphasis on the children’s games of her childhood, life in earlier times when neighbors watched after each other’s children at play, and dramatic portrayals of common, interpersonal relationships. She has a deep an underlying concern for the contemporary social landscape and way in which many children suffer from lack of strong parenting. 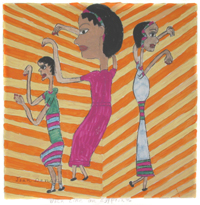