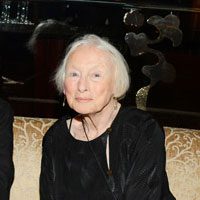 A native of New York, Joan Vennum studied art at the University of Illinois, Champaign, and at Washington University in St. Louis, Missouri. Her main inspirations have been the works of Mondrian, de Kooning and, particularly, the Dutch old masters’ use of space and minute detail. More importantly, two events affected Vennum’s artistic point of view during her early development. As a child she was mesmerized by the New York Planetarium’s simulation of the universe and the vastness and mystery of space. Then, as an adult, a trip to Sicily revealed the impact of weather on the landscape, the coming together of the elements on the horizon and the spectacle of the sea. The dynamism of the elements and the vastness of space are made present in Vennum’s images through a combination of simple forms and intense surface detail. As Vennum says, “My goal is to express a large concept visually using what appear to be the simplest forms.” On rectangular or circular canvases, Vennum’s dense stippling, scratches and marks in vermilion, blue or milky white rise and recede in a vibration that pulsates with life force. Surface colors blend in a slanting motion that recalls a driving rainstorm; lights fade into darks suggesting the depths of the universe. Three-dimensional space is created through color and line only to be destroyed by the attention drawn to the surface of the painting itself. These processes produce an ambiguous space filled with light, grace and splendor.