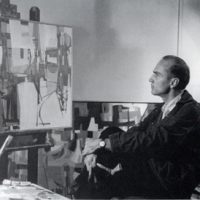 Joe Cox was born in Indianapolis, Indiana and studied art at the John Herron Art School and the University of Iowa. He went on to teach art at the Universities of Iowa, Florida, and Tennessee and, for the majority of his career, at North Carolina State University. During his tenure in North Carolina Cox became one of the state’s leading artists and art educators.

Primarily a painter and muralist, Joe Cox worked in oils, watercolors and acrylics. His images, primarily of the urban landscape, are distinctive for their use of thin washes of color and rhythmic line drawing. Cox began exhibiting early in his career with entries in the 1939 Golden Gate International Exhibition in San Francisco and the Carnegie International in 1941. Later in life he received the First Annual Raleigh Artsplosure Artist Achievement Award in 1985, the Raleigh Medal of Arts Award in 1991 and the North Carolina Award in the Fine Arts in 1993.

Paintings by Joe Cox can be found in numerous collections throughout the country, including the Mint Museum in Charlotte; the Chrysler Museum in Norfolk; the High Museum in Atlanta; the John Herron Art Museum in Indianapolis; the News & Observer Publishing Co. in Raleigh; and Glaxo International Headquarters in the Research Triangle Park. The Tennessee Valley Authority commissioned six of his murals. Other murals can be found at the American Oil Company in Virginia; UNC-Greensboro; the BB&T building in Raleigh; and SAS Institute in Cary, North Carolina.