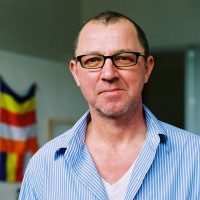 The contemplative paintings Untitled (Phnom Penh #1) and Untitled (Phnom Penh #5) were produced while Joe Fyfe lived in Phnom Penh in the spring of 2007. Using burlap he brought from the United States, he produced the paintings with brown cotton that he had purchased from the Russian Market. Fyfe writes “they replicate aspects of light absorbent fabrics common to Cambodia. One example is the deep orange robes of the Buddhist monks. Another is the dark brown of the meditation pillows at Wat Langka.”

Joe Fyfe was born in 1952 in New York City, where he currently resides. He received his Bachelor of Fine Arts degree from the University of Arts in Philadelphia, Pennsylvania in 1976. He has also shown at Galerie Pitch in Paris, in Ho Chi Minh City, and in Hanoi, Vietnam. Fyfe currently teaches at Pratt Institute in Brooklyn, New York. He has received a Bessie Award for stage design (1986) and grants from the Guggenheim Foundation, the Pollock Krasner and Gottlieb Foundations (2003 and 2008) for painting, and recently spent six months as a Fulbright research fellow in Vietnam and Cambodia (2006-2007). He writes about art for Art in America and Artnet, and is also a contributing editor at ArtCritical.com and Bomb magazine. 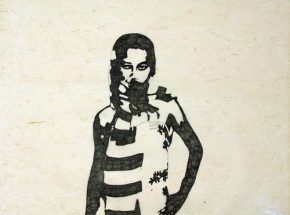