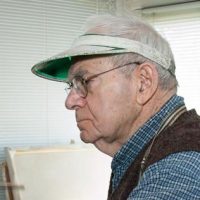 Born in New York and educated there at the Cooper Union, he is represented in the permanent collections of dozens of museums and corporate collections, including the Whitney Museum and the National Academy of Design in New York; the Hirshhorn and the Smithsonian in Washington, the Museums of Art in Philadelphia and Baltimore, the California Palace of the Legion of Honor in San Francisco and the Tel Aviv Museum in Israel; and Aramark Corporation in Philadelphia, First National Bank of Chicago and the 3M Collection in Minneapolis. Between 1951 and 2003, he had 14 one-man shows at Kraushaar Galleries in New York.

Prizes include the Prix de Rome, Guggenheim Fellowship, National Institute of Arts and Letters grant, Edwin Austin Abbey Memorial Scholarship for Mural Painting and the Isidore Gold Medal from the National Academy of Design, where he is a National Academician and former Secretary.

He has written and illustrated dozens of children’s books, including the prize-winning Merry Ever After and The Boy Who Loved Music (Viking Press), a National Library Association Notable book written by his son, David.