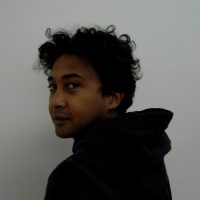 Joël Andrianomearisoa was born in Antananarivo, Madagascar, in 1977. He lives and works between Antananarivo and Paris. Andrianomearisoa says of his work: ‘The only thing that matters to me is to deal with time. And what frightens me most is never to be on time, to be outdated. My way of answering this challenge is to be permanently against the current’. In his ‘dealing with time’ Andrianomearisoa falls into no clear category: his work crosses boundaries into video, fashion, design, sculpture, photography, performance, and installation. But perhaps his works in paper and textile are most indicative of his larger interests. Black features prominently, especially in his textile works, which hover enticingly between the ephemeral and the permanent. These works are partly sculptured and partly left to the chance and serendipity of the material with which he works. The same may be said of the performance and video works on which he has collaborated.

Andrianomearisoa has participated in a number of group shows, including Africa Remix; Rencontres Africaine de la Photographie in Bamako; the Havana Biennale; Fashion in Motion; the Design Biennale in St Etienne, France; and Africa Now!. His solo shows include Bir Gece, a one-night performance and installation in Istanbul; Habillé – Deshabillé, a performance/video piece in Stockholm and Saint-Brieuc; Bar and Une Histoire in Antananarivo (2004 and 2008 respectively); Black Out in Istanbul; and I don’t know how to begin, I don’t know how it will end in Ghent. 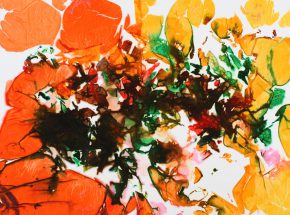