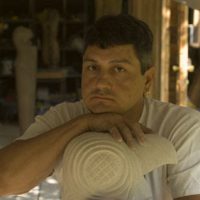 Joel Queen is a ninth-generation potter, who traces his pottery lineage through the Bigmeat family in the Eastern Band of Cherokee Indians. He offers five styles of pottery including the black pottery, which is the most traditional. “As a member of the Eastern Band of Cherokee Indians, I feel I have a responsibility to keep Cherokee art alive,” he says. “I live to teach others about my art and the Cherokee culture.”

While Joel continues to preserve the traditions of Cherokee pottery, he also blends contemporary and traditional designs. His black pottery is hand built, hand polished, and hand fired in an open pit. Using tools that he has hand carved, Joel incises his pots with both traditional and modern designs, and he often adds pieces of turquoise and coral.

In the spring of 2002, Joel was among a small group of Cherokee potters responsible for reviving the Cherokee stamped pottery. Stamped pottery is the oldest of the Cherokee pottery traditions and dates back thousands of years. These pots are hand coiled, burnished, and fired in an open pit at a high temperature, using methods that render them waterproof. They can be used for cooking outdoors over an open fire.

In addition to being a potter, Joel is also a sculptor and wood carver. His work has won awards nationwide. “The simplicity of line is what I look for,” he says, “and line is what I manipulate. Stone and wood speak to me in a visual picture and then I carve that image. Ceramics binds my images to the functional world.”