John Agnew was born in Dayton, Ohio. His parents met in art school, so he had an early exposure to the art world. Despite this influence, his early interests lead to dinosaurs and reptiles, and plans to become a zoologist. This course was nurtured by the Dayton Museum of Natural History, where he went through the museum`s nature lore classes and as a high school student landed a job in the museum`s “Junior Curator” program, caring for the live reptile display.

When his artistic talents were discovered, he moved to the museum`s exhibits department where he made models and painted diorama backgrounds. Deciding that exhibits let him enjoy the best of science and art, he realized that museum exhibits would be his career choice. He pursued a degree in Fine Arts while taking as many science electives as he could.

After graduation 1976, his first job was as Curator of Exhibits at the Science Museum of Palm Beach County. The Florida Everglades was nearby, and Miami offered a convenient jumping off point for the Caribbean and Central America. His interest in the tropics grew until he knew that painting the natural world was his true calling. He left the museum position, and began painting full time in 1983.

John Agnew`s work in museums and zoos has fostered a dedication to authenticity in his paintings. He has an international reputation for his photo-realistic portrayals of the lesser known and lesser loved animals, especially reptiles and amphibians. His paintings and prints are in collections around the world; the USA, Canada, Belize, UK, Norway, Switzerland, Russia, Malaysia, Australia, and others. John`s landscapes, inspired by his diorama work in museums, are in demand, and he has exhibited numerous times in shows like “Arts for the Parks.” The US State Department has borrowed three of his national park landscapes for display in the US Embassy in Minsk, Belarus in 2007, and at the US Embassy in San Jose, Costa Rica in 2008. John`s realistic paintings of birds have been displayed in numerous shows including “Birds In Art” at the Leigh Yawkey Woodsen Art Museum, and he provided several color plates for “A Field Guide to the Birds of the Philippines.”

In 2009, John was named Artist In Residence for Pictured Rocks National Lakeshore, and won the “Patricia A. Bott Award for Creative Excellence” from the Society of Animal Artists. In 2007, John won the $10,000 Grand Prize in “Paint the Parks,” a national juried show of art concerning our national parks, sponsored by Paint America (www.paintamerica.org). The winning painting was “Looking For The Shore,” displayed in this portfolio. He also received the “Award of Excellence” in 2007’s “Art and the Animal,” the annual show of the Society of Animal Artists. In 2001, North Light Books published John`s book, “Painting the Secret World of Nature,” a complete guide to John`s techniques. He is a Signature Member of the Society of Animal Artists, a member of Artists For Conservation, and a founding member of Masterworks for Nature, from its beginnings as “Wildlife 2000” in 1999. 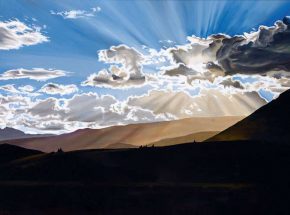 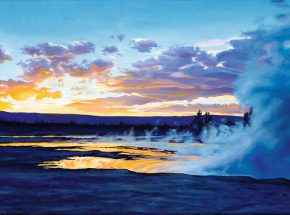