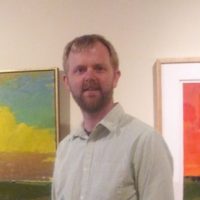 John Karl Claes was born and raised in the San Joaquin Valley of California. He began painting in high school and went on to complete a B.A. at California State University, Stanislaus and then earned a M.F.A. in painting and drawing from the University of North Carolina, Greensboro. Since graduating, he has received numerous awards, both regionally and nationally, He has shown his paintings and drawings regularly in many solo and group shows.

Claes’ paintings of the Agricultural landscape of the West have been described by the Sacramento Bee art critic Victoria Dalkey as, “Original…(he uses) deeply saturated color in his raw and romantic landscapes with dramatic skies. His works can move towards abstraction and the color investigation of Mark Rothko.” His work is represented in galleries throughout the West. He currently resides with his wife and two sons in California’s Central Valley where he also maintains his studio.