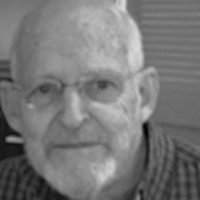 “Art makes one see, but what one sees makes art,” said op sculptor John Goodyear.  The idea for three-dimensional painted sculptures originated while Goodyear painted his house in Grand Rapids, Michigan. His kinetic constructions enabled viewers to interact with their moving parts and were typically suspended by a hanging grille or open grids, behind which dangled a patterned canvas. The grilles were triggered by motion sensors, which would create optical movement, illusions of perspective, and iridescent colors. Working within various art movements, Goodyear’s art progressed from abstract expressionism, op art, to conceptual minimalism while maintaining his sense of color and design.

Early in his art career, Goodyear attended the University of Michigan, Ann Arbor, specializing in design and earning a Bachelor of Arts degree in 1952 and a Master of Arts degree in 1954. Goodyear was drafted into the United States Army, serving in Japan for two years; the architecture and religious motifs of Zen Buddhism would become points of inspiration and characterization in his artworks. He taught art at the University of Michigan, Grand Rapids, from 1956-1962, and the University of Massachusetts, Amherst, on a grant from the Graham Foundation. In 1964, Goodyear began teaching at the Mason Gross School of Visual Art at Rutgers University in New Jersey, while preparing for his first solo show at the Amel Gallery in New York. During his 1970 Center for Advanced Visual Studies fellowship at the Massachusetts Institute of Technology, Cambridge, he worked under Hungarian-born artist and designer Gyorgy Kepes and constructed sculptures that featured inner heating. Around the 1980s, Goodyear created six major public sculptures and works commissioned for the New Jersey Arts Inclusion Program and the State House in Trenton. After retiring from Rutgers, he hosted a major retrospective at the Michener Art Museum in Doylestown, Pennsylvania and was co-curator of Dada Country at the Hunterdon Art Museum in Clinton, New Jersey. Goodyear’s works are in over sixty museum collections, including the Metropolitan Museum of Art and Museum of Modern Art, both in New York; and the Smithsonian American Art Museum, Washington, D.C.; as well as fifty public collections around Europe.