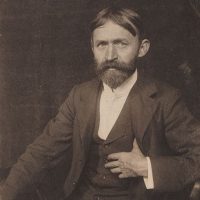 John Henry Twachtman was a protege of Frank Duveneck, a friend and teacher, who in 1875 invited the young artist to accompany him to Munich. There Twachtman adopted the characteristic dark palette and rapid open brushwork of his Munich colleagues. After refining his painting skills on a trip to Venice in 1877, he returned to the United States and developed a forceful, realist manner, capturing the energy of urban life in Cincinnati and New York. Twachtman departed for Paris in 1883 with his wife and son to study with the popular teachers associated with the Académie Julian. In the late 1880s, Twachtman settled in Greenwich, Connecticut and painted numerous landscapes on his 17-acre farm repeatedly during different seasons, seeking to convey his personal response to the sensuous aspects of nature. By the mid-1890s, Twachtman had become fully identified with the Impressionist movement, and American critics often compared him to Claude Monet. In 1897, Twachtman became a founding member of the Ten American Painters (or “The Ten”), a group of artists who seceded from the Society of American Artists and exhibited together for the next twenty years. Of The Ten, J. Alden Weir, Childe Hassam, Willard Metcalf, Frank Benson and Twachtman were united by their rejection of descriptive art in favor of more subjective, innovative interpretations of nature. Twachtman created some of his boldest and most experimental works for inclusion in this group’s exhibitions. Twachtman felt he never achieved the fame and fortune he deserved and modern critics and colleagues agree he was far ahead of his time. Friend and artist Thomas W. Dewing described him as the “most modern spirit … too modern, probably, to be fully recognized or appreciated at present; but his place will be recognized in the future …” He died unexpectedly in Gloucester, Massachusetts. (bio by: Bob on Gallows Hill).