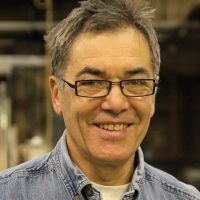 John Himmelfarb, son of Eleanor and Samuel, is a painter. Born in 1946 in Chicago, Illinois, he grew up in a household of artists surrounded by their art and the countryside that inspired them. John finished his undergraduate studies at Harvard University in liberal arts with a major in architectural sciences. He opened a studio in Chicago in 1970 and has worked primarily in Chicago since that time.

“John’s work is based on a curious amalgam of postwar expressonism and surrealism,” cites Helen Sheridan, Director, Collections & Exhibitions of Kalamazoo Institute of Arts, Kalamazoo, Michigan. “He is strongly influenced, for example, by both the abstractionism of Jackson Pollock, with its emphasis on overall gesture and markmaking, and the Art Brut expressionism of Jean Dubuffet, with its use of childlike imagery to suggest directness and spontaneity. The fact is that John has drawn upon a number of influences from 20th century art history, but he has managed to move beyond these influences to develop his own powerful and personal voice.”