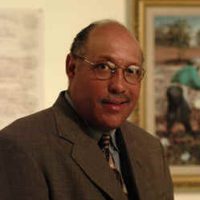 Born May 11, 1950 in Columbia, S.C. Jones has been a freelance artist and illustrator for more than 25 years. His former clients include Time Life Books, IBM, Westinghouse, Rubbermaid, NASA, Gadded Space and Flight Center, and the U.S. Postal Service.

Jones explores life through art. This multi-talented artist uses oils, acrylics and watercolors for his painting. Striving for detail in light and reflection, he meticulously draws each painting first, and then layers it with color, resulting in very realistic interpretations of everyday life and landscapes, as well as historical insights into our past.

Jones’ goal is to paint the African American experience starting with the slave trade in Africa, through the Middle Passage and pre-civil war era, and contrast it with African Americans today.

Mr. Jones is the artist and author of the book and traveling exhibition, Confederate Currency: The Color of Money, Images of Slavery in Confederate and Southern States Currency.

In addition to the “Confederate Currency: The color of Money” series, he has painted a series on the Buffalo Soldiers, the 54th Massachusetts regiment and African Americans in the Military. He is currently working on a project that puts focus on the everyday lives of the Gullah people and the struggles and issues they face in trying to sustain their culture in modern day America.

His work is represented in several private and public collections including the Charleston Metro Chamber of Commerce, the City of Charleston, Benedict College, The College of Charleston, and The Martin Luther King, Jr., National Historic Site. His recent published works include “The cover of the Charleston Area Visitors guide”, and “the Charleston Farmers Market”. His paintings are available at the Rita Smith Gallery in Columbia, SC and Gallery Chuma in Charleston, SC.

Jones has received several awards, including merit awards for his works in the 1998 and 1999 Piccolo Spoleto Festival Art Show.

Jones, who graduated from high school in 1968 and self-taught, has been drawing since early childhood. Drafted into the U.S. Army in 1970, Jones served in the Vietnam War, where he also took illustration classes in military School.

Jones has lectured widely as an artist, activist and motivational speaker at various universities and colleges, conferences and corporate events.

His current traveling exhibition, Confederate Currency: The Color of Money has been featured in several well-respected and top media outlets, including The New York Times, Time Magazine, San Francisco Chronicle, The Boston Globe, CNN and National Public Radio and The Post and Courier.