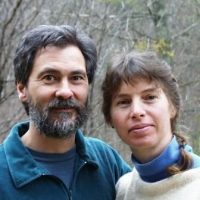 John Littleton and Kate Vogel met at the University of Wisconsin Madison where they received their Bachelors degrees. Since 1979 they have lived in the mountains of North Carolina where they began their collaboration on blown and cast glass in the studio of John’s father, Harvey Littleton. In 1980 they moved to Bakersville, NC where they maintain their home and studio, and are raising three children together.

John and Kate are called on to give lectures at art museums and universities, and have taught casting and blowing at Penland School of Crafts. Their work is in public and private collections in North America, Europe, and Asia. They have been spotlighted in magazines, newspapers, television, and, most recently, are featured artists in the film “The Blue Ridge Parkway – America’s Favorite Journey” showing at the Blue Ridge Parkway Destination Center.