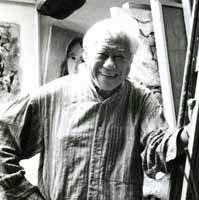 The Hawai‘i painter John Young believed that a great university campus required at least one museum. Such a facility would offer students, faculty, and the general public a place to appreciate and learn from actual artifacts, especially those that had enduring aesthetic value.

Through his painter’s eye, Young was always inspired by works of ancient art. When he sold his first painting as a young artist, he used the money to purchase an object from a famous antique store that had a branch in Waikiki. This acquisition commenced a lifetime of collecting art, and produced an eclectic but notable collection. In the latter years of his life, Young gifted some of his collections to the Honolulu Academy of Arts and Punahou School.

In 1991, Young began a collaboration with the University of Hawai‘i. The master plan was to convert one of the wings of Krauss Hall, then undergoing restoration, into a museum. With an initial starter collection gifted by Young, the museum would house quality works of art gifted by friends of the University. The Museum was John Young’s last major project, an endeavor he dedicated to his parents, Mr. and Mrs. Young Hin.

On February 24, 1999, over a year after his death, John Young’s vision for a campus museum became a reality with the official dedication of The John Young Museum of Art. The facility is the University’s first museum.