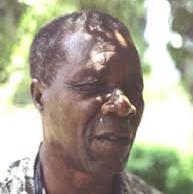 Joram Mariga was born in Nganga and known as the father of Zimbabwe stone sculpture. Before his death, he was still very active and highly regarded in the artist sculptural movement of Zimbabwe. His career was inextricably linked with the early days of the art movement and from his Nyanga studio. He influenced many to take up stone sculpture, including John and Bernard Takawira, Moses Masaya and Chrispen Chakanyuka; the latter being influential in starting the Tengenenge art community. Admired by Frank McEwen, contributing founder of the National Gallery of Zimbabwe, he said of Mariga, he “Whispered the Gospel of sculpture” throughout Zimbabwe and was regarded with much affection and respect. Mariga’s own works often reflect his cultural beliefs in a very strong and distinctively personal style.