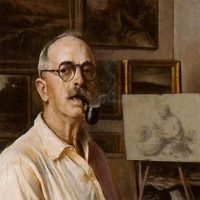 Jose Arpa y Perea was born in Carmona, Spain in a small village outside of Seville. He attended the School of Fine Arts in Seville under the instruction of Eduardo Cano de la Pena. He traveled and exhibited extensively in Europe, the United States, Mexico, South America and Africa before he came to reside in the U.S. in San Antonio, Texas in the early 1900’s. While in San Antonio, Arpa was a prolific painter, taught classes, and developed friendships with local artists. In 1932 he returned to his native Spain where he died in 1952 at the age of ninety-four.

José Arpa y Perea studied in the School of Fine Arts in Seville, Spain, wherehe received the Rome Prize three successive times, awarding him six years of study in Rome. He was already well known in Europe when the Spanish government sent four of his paintings to the World’s Fair at Chicago in 1893. Because of the recognition given his work in Spain and in the United States, the Mexican government invited him to become the director of the Academy of Fine Arts in Mexico City, where he briefly lived and worked.

Later he traveled to San Antonio, Texas, where his painting A Mexican Funeral, exhibited at the International Fair, brought him to the attention of Texans. Arpa remained in that city for many years of painting and teaching where he also influenced the work of Porfirio Salinas. Arpa was a brilliant colorist, and his skill in handling sunlight earned him the nickname “Sunshine Man.” His style was realistic; his loose, fluid brushwork evoked a sense of atmosphere.