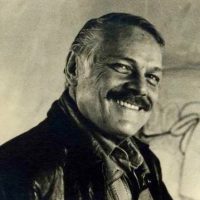 José Luis Cuevas was a Mexican painter, draftsman, and sculptor recognized for his neo-figurative ink and pencil drawings and surrealist portraiture. The disproportioned and grotesque figures in his artworks and self-portraits include prostitutes and other forms of degraded humanity that represent isolation and man’s inability to communicate.

Although primarily self-taught, Cuevas studied at La Esmeralda, or the National School of Painting and Sculpture, Mexico City, at age ten and attended the Institucion de Enseanza Universitaria, Mexico City for printmaking and engraving. Cuevas was an integral part of the Breakaway Generation during the 1950s, believing Mexican muralism was overly mainstream and partial towards the government. His 1956 article, La Cortina del Nopal (“The Cactus Curtain”), condemned the art movement and advocated for artistic freedom and mode of expression. Cuevas received numerous awards throughout his career, including the National Prize of Science and Art of Mexico, the highest distinction given by the Mexican government. He was awarded the Order of Arts and Letters by the French Minister of Culture and the Tomás Francisco Prieto Award in Engraving by Queen Sofía of Spain. In 1992, the José Luis Cuevas Museum, named in his honor, officially opened. His work has been exhibited at the Museum of Modern Art, Mexico City; the Museum of Contemporary Art, Caracas, Venezuela; the Paris Museum of Modern Art; and the Phoenix Art Museum.