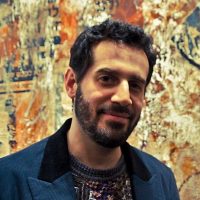 José Parlá has received critical acclaim for his works, which lie at the boundary between abstraction and calligraphy. Composed from layers of paint, gestural drawing and found ephemera, his work evokes the histories of urban environments. Parlá is a documentarian of city life. Using the backdrop of world cities, he re-makes in paint what can appear to be photorealist fragments of what he sees in the chaos and rush of the metropolis. His paintings reflect the accumulated memories and experiences, the walls that show a place that was, but no longer is — built over, renewed in some other configuration. Parlá paints revelations — transcriptions of the process — proof of the history of our neighborhoods. Parlá’s work shows that words, signs, and marks come to mean more; over time, in this symphony of diversity, both incongruous and in harmony, that surrounds our contemporary life. His practice originated in graffiti’s experimental and collaborative approaches during the eighties. These markings expose his drive to say or divulge the passing of time, in the moment.