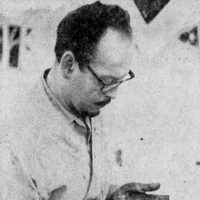 “Artists seem to fall into two categories: those who are extremely verbal about their work and those who prefer silence, believing there is little to say…the more I learn about the world, the more difficult it is to live it. The art process in part makes life somewhat more livable,” said printmaker Joseph Demarais (1927-1971). Demarais had gained notoriety for his three-dimensional and color intaglio printmaking. During his seven-year career, he created several hundred prints and made over 800 plates from his “intaglio-relief” method. He combined the two processes of intaglio and relief printing and incorporated acetate, copper, Masonite, and zinc to achieve fossil-like, bas relief textures on his surfaces. Using earth tones to paint simplistic forms of people, windows, and doors, Demarais portrayed the struggles and hardships faced by migrants to America.

As a teenager, Demarais was interested in art and music, playing jazz trumpet across the Hudson River and Greenwich Village, New York. He served in the United States military during World War II, performing with the army band throughout Europe until his discharge in 1947. Demarais received a master’s degree in music theory and music education in 1948. After resigning as head of the music department at a New York state high school, he decided to pursue art and attended Miami University, Ohio, in 1960, receiving accolades for his early work in sculpture and ceramics. Demarais taught art for two years at Teachers College, Columbia University in New York and then printmaking in 1965 at Trenton State College in New Jersey. Public collections of his works are in museums worldwide, including the Central Intelligence Agency headquarters and the Smithsonian American Art Museum, both in Washington, D.C.; the Brooklyn Museum, New York; the Yale Art Museum, New Haven, Connecticut; and the Victoria & Albert Museum, London, England.