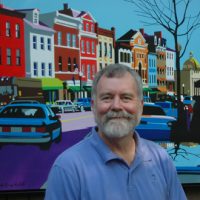 From the beginning of his life, Joseph Craig English was destined to become
an artist. His mother ordained it, telling his father before he was born, that if
this baby was a boy, he would be an artist. As soon as he was able to hold
a brush, he was encouraged to paint. His early efforts were brightly colored
and energetic, not unlike his work today.

He was introduced to silkscreen printmaking by his 10th grade art teacher
and fell in love with the intense color and flat finish of the inks. By 1972 he
had begun pulling his original prints in earnest. Working as a designer at
an advertising agency in Washington, DC, by day, and printing at night and
through the weekends, he soon grew frustrated with the split careers. In
1974 he resigned from the agency and devoted all his time to painting and
making his silkscreen prints.

In 1975 the artist and his wife purchased a home in the historic town of
Washington Grove, Maryland and began building a studio. By 1980, with
his works’ popularity increasing, English was already breaking ground for his
new studio and doubling the size of the existing house. Believing that the
best way to present art to the public was in a theater that was relaxed and
comfortable, the artist took to the streets, showing his work at art festivals
throughout the country. Developing a huge customer base, English was now
being approached by art galleries who found his upbeat, beautifully crafted
prints to be an exceptional value in the art market.

By the early 1990’s the roof came off the studio and a huge second floor
studio was built in an attempt to accomodate the new projects being created.
The internet opened the door to new exposure and new markets for
his work. Now added to his heavy printmaking schedule were a variety of
new projects that included sculpture and painting. The artist continues to
expand the capabilities of his studio, taking special commissions that challenge
him and present new opportunities for his talents. He continues to
show and sell his work at local area art festivals; enjoying the opportunity
to meet the many collectors who love his work. His main focus, though,
continues to be the colorful interpretation of the commonplace.
To that end, he can often be found, camera in hand roaming the
Mid-Atlantic region, gathering new subjects for his artwork and in his studio
working on his newest project.