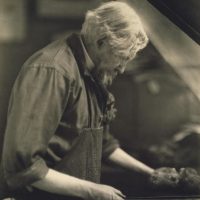 Joseph Pennell was an American artist and author. Pennell was born in Philadelphia, and first studied there, but like his compatriot and friend, James McNeill Whistler, he afterwards went to Europe and made his home in London. He produced numerous books (many of them in collaboration with his wife, Elizabeth Robins Pennell), but his chief distinction is as an original etcher and lithographer, and notably as an illustrator. Their close acquaintance with Whistler led the Pennells to undertake a biography of that artist in 1906, and, after some litigation with his executrix on the right to use his letters, the book was published in 1908.

Pennell visited San Francisco in March 1912 where he undertook a series of so-called “municipal subjects”. These were exhibited in December 1912 at “the prestigious gallery of Vickery, Atkins & Torrey”, according to Mary Millman and Dave Bohn, authors of The Master of Line: John W. Winkler, American Etcher , (Capra Press: Santa Barbara, CA, 1994). It is possible that Pennell’s visit inspired San Francisco printmakers Robert Harshe and Pedro Lemos, along with sculptor Ralph Stackpole and painter Gottardo Piazzoni, to found the California Society of Etchers in 1912, now the California Society of Printmakers. Longtime members of California Society of Printmakers believe that Pennell was a member of the New York Etchers Club, established in 1877, although his membership in the New York Etchers Club is not confirmed.

Pennell did the poster for the fourth Liberty Loans campaign of 1918. It showed the entrance to the New York City harbor under aerial and naval bombardment, with New York in flames and the Statue of Liberty partly destroyed, her head and her torch blown off.