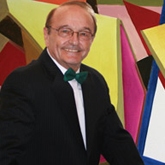 Joze Vodlan was born in Klenovo, a town nearby Rimske Toplice, Slovenia. He was the eighth child of Franc and Helena Vodlan and was predestined to take over the family farm after his father’s death. However, after finishing secondary schools in the Slovene cities of Celje and Maribor, his talent and total devotion to art led him abroad. In 1958, he began his studies at the Art Academy in Linz, Austria, and graduated with honors in 1963 under the guidance of Professor Herbert Dimmel. During his years at the academy, he earned his living through painting and in restoration projects in northern Austria. He collaborated extensively with the academic restorers Ludwig Peische and Anton Teckert. As a student, he participated in the uncovering and conservation of 12th and 13th century frescoes in Bad Kreuzen, a town located by Grein, Austria. Additional projects included the conservation of the sepulchral site in Gmuend and the old Catholic Church in Linz, as well as the collaboration in the restoration of the Linz Museum, Austria.

After he obtained his degree from the academy, he traveled to America. In Cleveland, Ohio he met the sculptor, France Gorse and reencountered the academic painter and former childhood companion, Miro Zupancic. Together, the three artists founded the art club Lok, which operated until 1970 upon Gorse’s return to Europe. Afterwards, Vodlan was engaged in graphic art design with prominent American companies for several years. Throughout the 1970’s he longed for a more intensive personal devotion to art and returned his focus to painting. During this time he remained actively involved with the Slovenian community in New York. With his family, Joseph currently resides and continues to create his artwork in Charlotte, NC, USA. 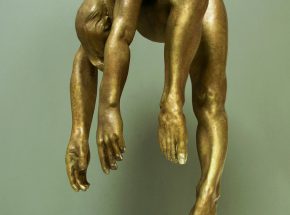