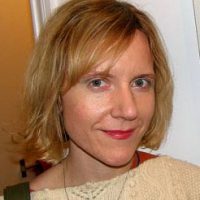 Jovi Schnell’s intricate, colorful pieces are brimming with imagination. At the same time, her pieces call to mind ancient artistic traditions. Schnell acknowledges that her work is inspired by myriad sources, from textiles to Byzantine mosaics, but her work is also fresh and innovative in its unusual combination of forms. She says, “My rule with reference material is that I can never just reproduce anything outright. I might recombine a few different elements; bring their general shape together in a new way but the piece has to feel like it’s growing out of itself along with my own intuition so that it has its own logic.”

In her mosaic at the U.S. Embassy in Belgrade, Valley of the Lilac, Schnell alludes to a number of Serbian traditions and art forms. Both the title and imagery reference the medieval Serbian tale of a king welcoming his foreign bride by planting lilac trees along the banks of a river. Schnell’s colors also refer to local culture. She says she chose her colors specifically to match the mosaics in St. George’s Oplenac Church in Topola, a town not far from Belgrade. Further, the motifs of her mosaic are inspired by Serbian art forms, specifically the foliate and solar motifs from Serbian costume and kilims.

Schnell is a graduate of the San Francisco Art Institute and has done fellowships and exchanges with the Rietveld Akademie in Amsterdam, the Akademie Vytvarnych Umeni in Prague, and the De Ateliers ’63 Studio Program in Amsterdam. Her work has been commissioned by the San Francisco Art Commission, among others, and can be found in many collections, including the Museum of Fine Arts in St. Petersburg, Florida. She currently lives and works in San Francisco, California.