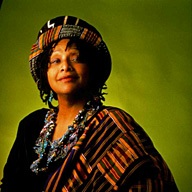 Joyce J. Scott, one of the most significant artists living and working in Baltimore today, was born in Baltimore and still lives in the Baltimore neighborhood where she was raised. Sculptor, jeweler, printmaker, installation artist, performance artist, and educator, Joyce J. Scott draws from influences as wide-ranging as her media: from African and Native American experiences to comic books, television, popular American culture sources and the contemporary culture as it exists on the streets of her urban Baltimore neighborhood. For more than three decades, this multi-talented artist and provocateur has created objects of exceptional skill and beauty while offering her own distinctive commentary on social issues such as stereotyping, violence, and other forms of social injustice.

Joyce Scott specializes in weaving, quilting, beadwork and glass. Scott received a B.F.A. degree from the Maryland Institute College of Art and a M.F.A. in crafts from Institute Allende in Mexico, with further study at Rochester Institute of Technology in New York and Haystack Mountain School of Crafts in Maine.

Joyce Scott’s mother is the renowned fiber artist, Elizabeth Talford Scott, who created quilts with unconventional appliqué and embroidery techniques. She has collaborated often with her mother. Scott’s earliest art lessons were received at home from her mother. Scott began to be influenced from an early age by three generations of basketmakers, quilters, storytellers and wood, metal and clay workers. At the center of this generative heritage was the influence of Africa, where the creation of utilitarian objects of beauty is everyday practice. Scholar Leslie King-Hammond writes of Afircan Americans in the rural South that they, “…by necessity…became adept–to the point of virtuoso innovation and improvisational facility–at creating not just ordinary objects for utilitarian purposes but also extraordinary objects of enormous beauty, power, and meaning from the scraps, residue, and rejected materials in the environment.” (Leslie King-Hammond, Kickin’ It With the Old Masters, p. 10). In keeping with traditional African practices, Scott often uses beads as medium.

Scott is renowned for her striking creations and biting social commentary on issues such as racism, violence, sexism and stereotypes. She writes, “I believe in messing with stereotypes, prodding the viewer to reassess.” (Joyce J. Scott, Kickin’ It With the Old Masters, p. 42) In her role as a performing artist, she is also known for her use of humor to drive a point home as in “The Thunder Thigh Review” where she openly mocks America’s obsession with thinness. According to Scott, “It’s important to me to use art in a manner that incites people to look and then carry something home – even if it’s subliminal – that might make a change in them…I am a visual and performance artist because it’s my best voice as a human. It allows interaction, sometimes masked, even scabrous, in ways polite society finds uncomfortable,” writes Scott. “My work is not meant to be openly offensive. I skirt the borders between comedy, pathos, delight, and horror. I invite the viewer to laugh at our collective selves. Humans are hilariously precocious.”

Joyce Scott has exhibited widely across the country, and was featured in a major retrospective of her work over the past 30 years at The Baltimore Museum of Art in 2000, titled Joyce J. Scott: Kickin’ It With the Old Masters. The show included four installations, an artist-curated mini exhibition, a one-person performance piece, beaded sculptures and fiber pieces. The Baltimore Museum of Art and Maryland Institute College of Art (MICA) collaborated on the exhibition with the show curated by George Ciscle. Scott worked with the exhibition organizers to develop interpretive tools and participate in workshops to help educate and inform visitors of diverse ages and backgrounds about the issues she addressed. She also served as an artist-in-residence at two local elementary schools, where she worked with children and their families to create a permanent site-specific installation. Kickin’ It with the Old Masters drew more than 108,000 visitors to the BMA. The show remains a success, with an updated version of the 2000 retrospective, entitled “Kickin’ It with Joyce J. Scott,” currently being toured by Exhibits USA to ten museums through 2007; the dates are listed in the “Single-Artist Exhibition” area farther below.

Joyce J. Scott exhibits, performs, and lectures nationally and internationally and is the recipient of prestigious honors from the National Endowment for the Arts, the Louis Comfort Tiffany Foundation, Anonymous Was a Woman and the American Craft Council.