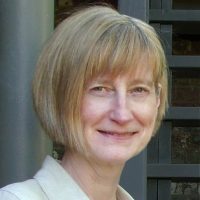 Judith James’ constructed textiles reveal a fascination with the structure of fabric and how it can be manipulated to reveal its poetic and communicative potential. Stitched resist dyeing processes informed by Japanese shibori patterned textiles, African adire cloth, and other early resist dyeing methods produce both soft, out-of-focus effects and clear, crisp markings of the process. The stitched line remains visible on the surface of the cloth even after the thread is removed. These processes are combined with screen-printing and relief printing. She uses this imagery to suggest landscape observed and imagined, recorded in the folding and stitching of the cloth.

“My work evokes idiosyncrasies in the landscape at large. The unpredictable and serendipitous effects that my fabrics reveal are turned to the act of communicating my feelings about place. The fabrics are marked by the same kinds of weathered and abraded textures that give character to the rural topography.

I create groupings of manipulated fabrics and then join and layer them through careful and often concealed hand and machine stitching. The compositions build naturally and organically, each fabric responding to its foundation and the foundation, in turn, adjusting to the overlay. Often, the ground surfaces are delineated by grids, sometimes wide, sometimes narrow, and these mark off the surfaces of my works as pastures and farmland mark off the rural landscape. Thread makes its way tentatively through these fabrics and these grids, marking pathways not unlike the random progress of a creek or stream.”

Judith James received a BFA in graphic design and photography from the University of Massachusetts at Dartmouth and an MA in textile design from the University of Nebraska-Lincoln. Before moving to Nebraska, she co-owned The Fabric Studio in Swansea, Massachusetts, where she taught clothing design and construction. She maintains a studio in Lincoln. Her textile constructions have been exhibited and published nationally and internationally and are included in private collections.

Group exhibitions have included the Fiber Biennials 2006, 2008 and 2010 at the Snyderman-Works Gallery in Philadelphia and SOFA 2006 in Chicago. In spring 2004 she exhibited new work in Art Textiles: Two Perspectives at University Place Art Center in Lincoln, with her husband Michael James, and at Galerie Jonas in Petit-Cortaillod, Switzerland. Solo exhibitions include Judith James: Textile Constructions at the Center for Art and Culture, Ste-Marie-aux-Mines, France in September 2009, and Judith James: Recent Works at the National Exposition Center, Birmingham, England, in August 2006. Her work was included in Flights of Fantasy, an Art-in-Embassies sponsored exhibition at the Museum of Art of Seoul National University in summer 2007.