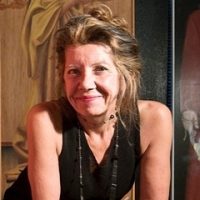 Washington, DC artist Judy Jashinsky has devoted more than ten years to what she terms “a fiction and a performance based on carefully studied historical facts” concerning the life and works of Artemisia Gentileschi (1593-1652). In searching for the historical Artemisia, whom she acknowledges as a mentor (“I never really had older women artist friends to guide and influence me”), Jashinsky’s work seeks out “the missing places” in Artemisia’s story, “to give her the honor she deserves.” Today, Artemisia is widely considered the most important woman artist of the pre-modern era, as well as a major figure in the art of the Italian Baroque, noteworthy for large-scale history and religious paintings which often dealt with female protagonists (Susanna and the Elders, Judith Slaying Holofernes, David and Bathsheba).

Judy Jashinsky’s work is represented in the National Gallery of Art, the National Museum of Women in the Arts, and the Art Institute of Chicago. She has had solo exhibitions in New York City, Washington, DC, and Ann Arbor, Michigan. Her Artemisia works have been the subject of articles in the Washington Post and Art in America.